Skip to Content
Home Around the World Reviews Vegetarian Food in Madrid – A Pleasant Surprise!

Hello, my loyal followers here at The Vegetarian Carnivore! I have been MIA for the last few weeks as I graduated college (!!!), moved out of my college apartment of 3 years, and headed off to Spain for a week-long vacation with my mom that we had been planning for such a long time, and then I stayed on in Madrid for an extra week after she left. And you know what that means: hunting down every vegan and vegetarian place to take a look and see if locals define and practice eating less/no meat. I had done a bunch of research beforehand, because I learnt my lesson after visiting Iceland last year, and having to eat caprese sandwiches for an entire week. So I went on a quest to hunt down the best vegetarian food in Madrid and Andalucía, which I will cover in the following posts.

If you guys didn’t already know, I minored in Spanish in college, because it is such a beautiful and useful language to know. I went to Barcelona two years ago and made plans then itself to come back to Spain and explore the other parts. And to be honest, after coming back, I realize now that there are so many more places I need to visit in Spain. Two weeks was good, but I need to go back!

It was like I was hitting two birds with one stone. Firstly, I was getting this complete immersion in the culture and history of the beautiful country, by visiting the famous landmarks and learning how Spaniards lead their day to day lives. And secondly, my trip doubled as a continuing Spanish language education by means of immersion. A lot of the places I went were not extremely touristy, which meant that it was likely that the locals did not know English. This was awesome for me, because I had to quickly find a way to convey my ideas to them, without the option of using an English word when I ran into a problem.

I want to put a big disclaimer out here and say that I did not have very high hopes for vegetarianism/veganism in Spain. After all, their signature dish is jamón ibérico, or Iberian ham. They are also very big on seafood and shellfish so I was a bit wary of finding meatless places. That being said, all my expectations were blown out of the water in terms of an abundance of vegetarian and vegan restaurants, vegetarian and vegan options in most omnivorous places, as well as quality of food in those places. No restaurant attempted meatless food by “sauteing vegetables and serving it with rice.” I was beyond impressed with Madrid, and Sevilla and Granada as well.

We ate at a pure vegetarian restaurant called Yerbabuena for dinner on our first night. It is located in a very central location on Madrid called Sol and was very accessible and easy to get to. Service was incredibly friendly and pretty quick as well. They brought out a fried small dish, accompanied by a shot of a mango juice, the equivalent of chips and guac at a restaurant here. 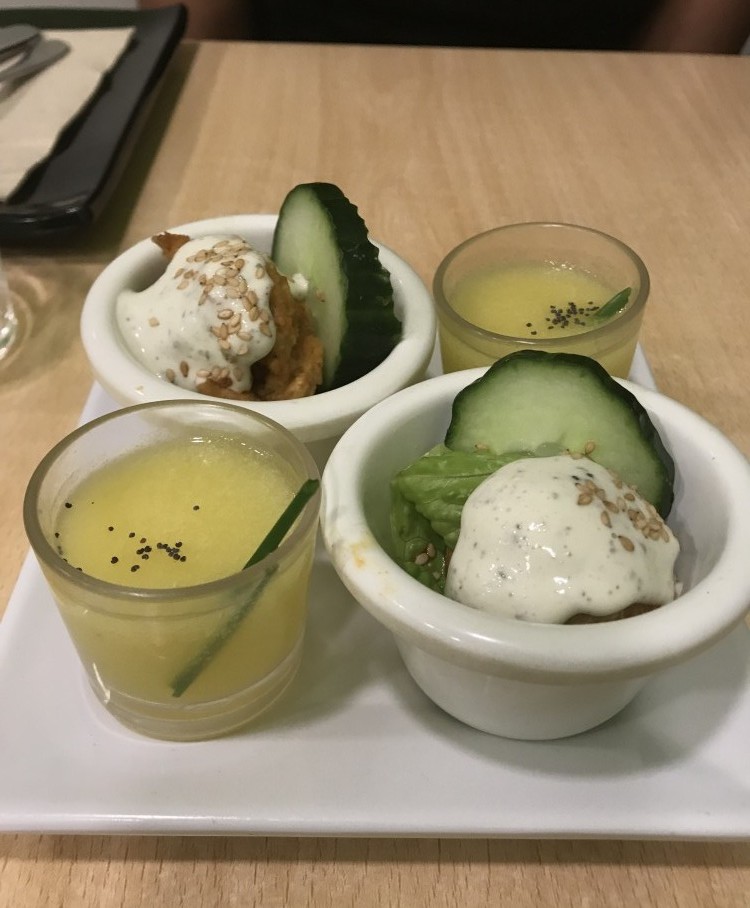 We ordered setas de cardo empanadas con pimientos de padrón (breaded and fried mushroom with roasted peppers) as our appetizer and it did not disappoint! One of the greatest aspects of this restaurant was the beautiful presentation of the dishes. The dish had a delicious pureed cilantro which adorned the dish, as well as mini bean sprouts and a dusting of red chili powder. My mom and I especially enjoyed the roasted peppers, which had been done very well. It was at this point that we realized that the portion sizes at this restaurant were incredibly huge and we were already starting to get full and decided to do just one entree from there. 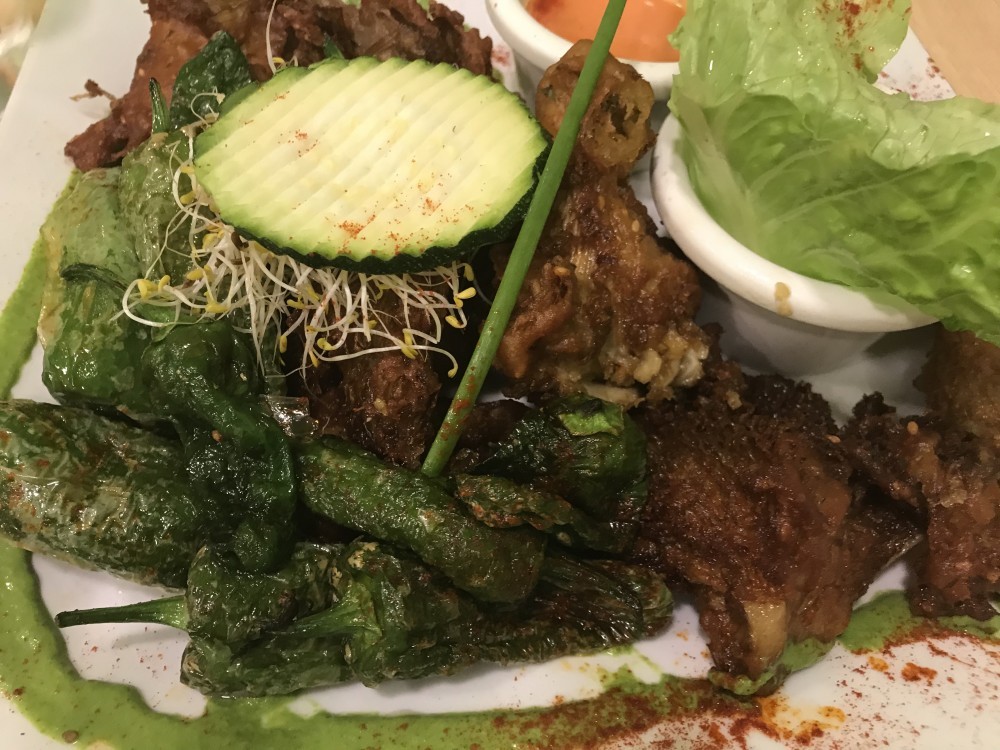 We went with the bistec de seitán con salsa de tomate encebollado (seitan “steak” with a tomato puree topping). This one was incredible because of the variety of colors on the plate. It was so beautiful I couldn’t wait to dig in. The dish itself was savory with the fried “steak” and tomato dressing, but the bright purple pickled cabbage added a lovely tang to the dish. 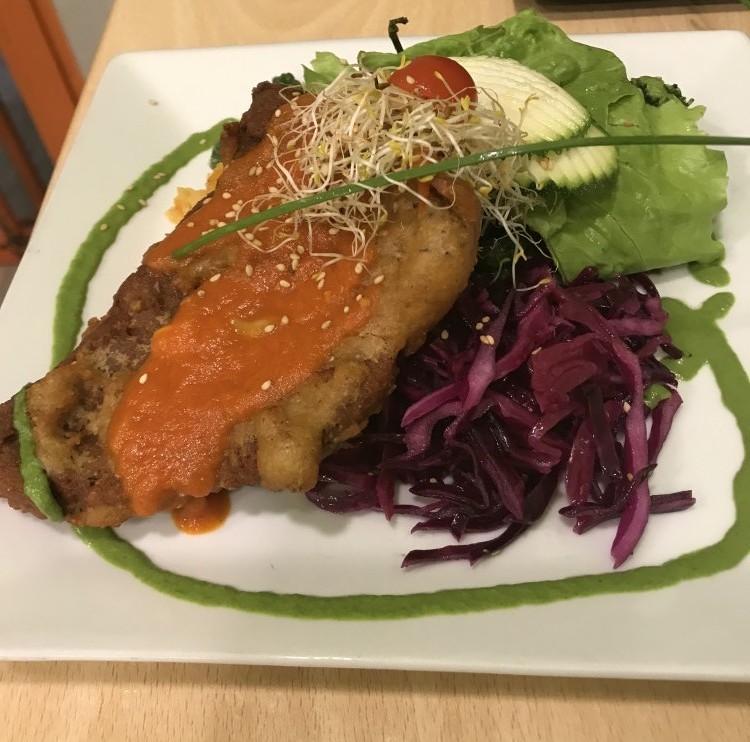 And let’s not forget dessert 😉 We had the dessert of the day, which was a sort of light cream topped with a choice of different syrups. I chose chocolate coffee, because it was a no-brainer 😉 They brought it out in a reusable mason jar looking container and served it with a small cup of green tea. It was so delicious and just the perfect portion size. 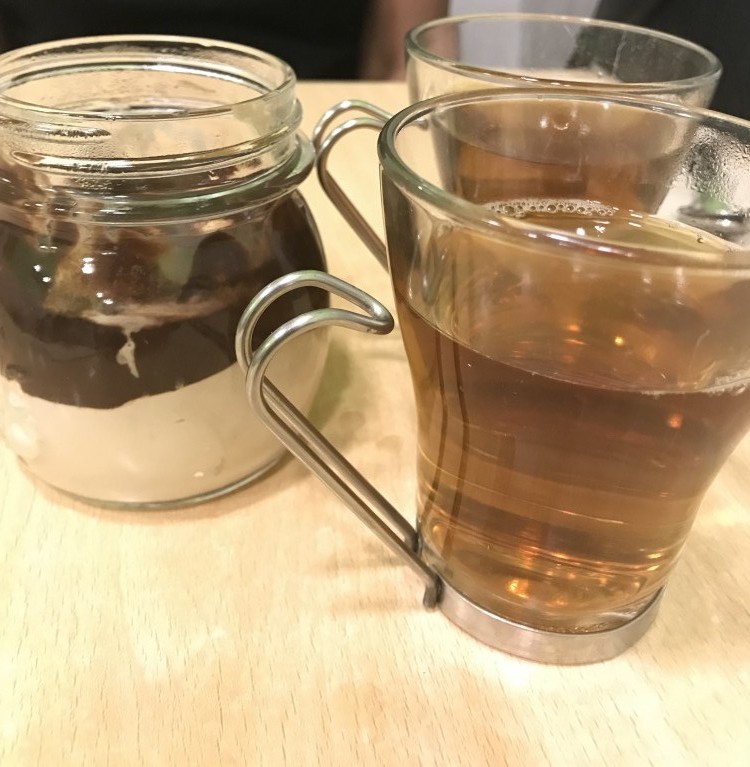 10/10 recommend this restaurant to any vegetarians and vegans (they labeled all their vegan dishes clearly) looking for a great place to eat in Madrid!

This little casual restaurant was located in Cortés, one of the most hip and happening neighborhoods in Madrid. It was accessible, but probably easy to miss unless you are specifically looking for it, as it is tucked away into a corner. I wanted to try this place because it was not exclusively vegetarian or vegan, just to see how good the options are in omnivorous places for people like me. Options were plentiful. I would say that just under a half of the menu was at least vegetarian, which is impressive. The ambiance was also nice and casual – I chose to sit at the bar for my dinner. 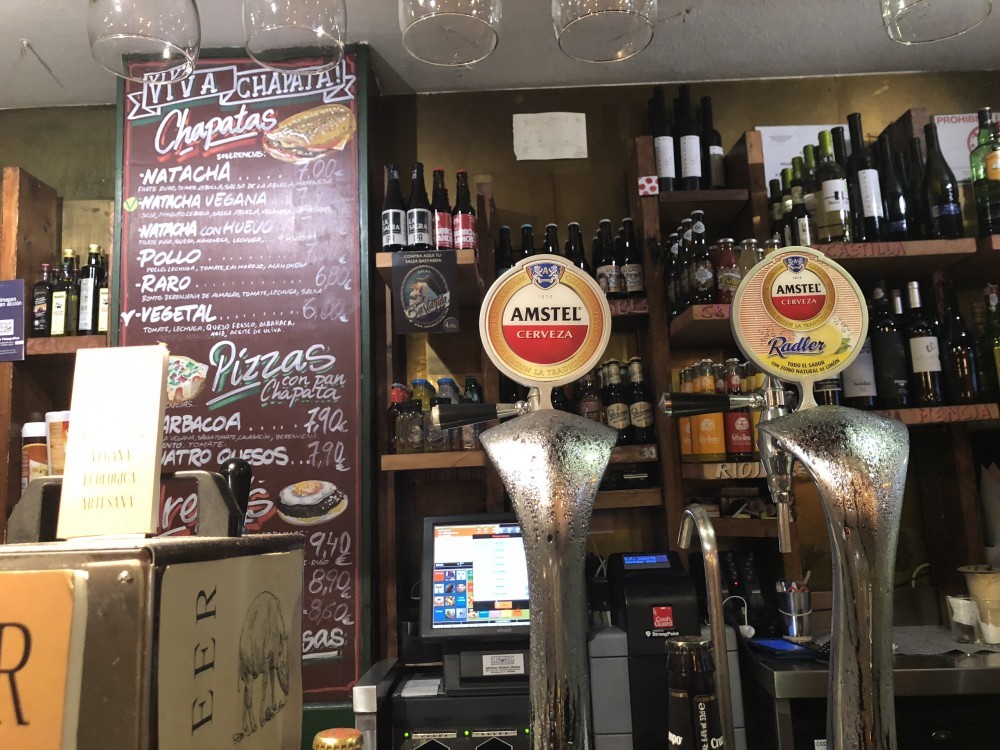 I went to this place on my second week in Spain on a day that I was particularly craving a good old-fashioned burger, but was nervous that no place would have a veggie burger, or that the concept did not exist there. Thankfully, this place had a pretty decent veggie burger. It honestly was not anything to write home about, but I wanted to include this place on my list purely to show that vegetarian/vegan is a very well-defined concept in Spain, and servers know what to recommend, as opposed to just giving you a blank stare like you have just said the most outrageous thing they have ever heard.

The burger tasted OK, but definitely lacked texture. The patty was pretty mushy, and for that reason I wouldn’t give it five stars. It also came topped with a weirdly cooked egg – it was like they half beat the egg and overcooked it into an omelet. It was rubbery and I ultimately just took it off the burger because it was not good. I liked the flavors and seasonings in the actual patty, though, so that was something they got right. I also had a really nice beer at this place, called Volandera, a local brew. It could have been the time I showed up, but I got the general idea that the service was not as friendly as it was in most other places in Spain, so that was a bit of a let down. 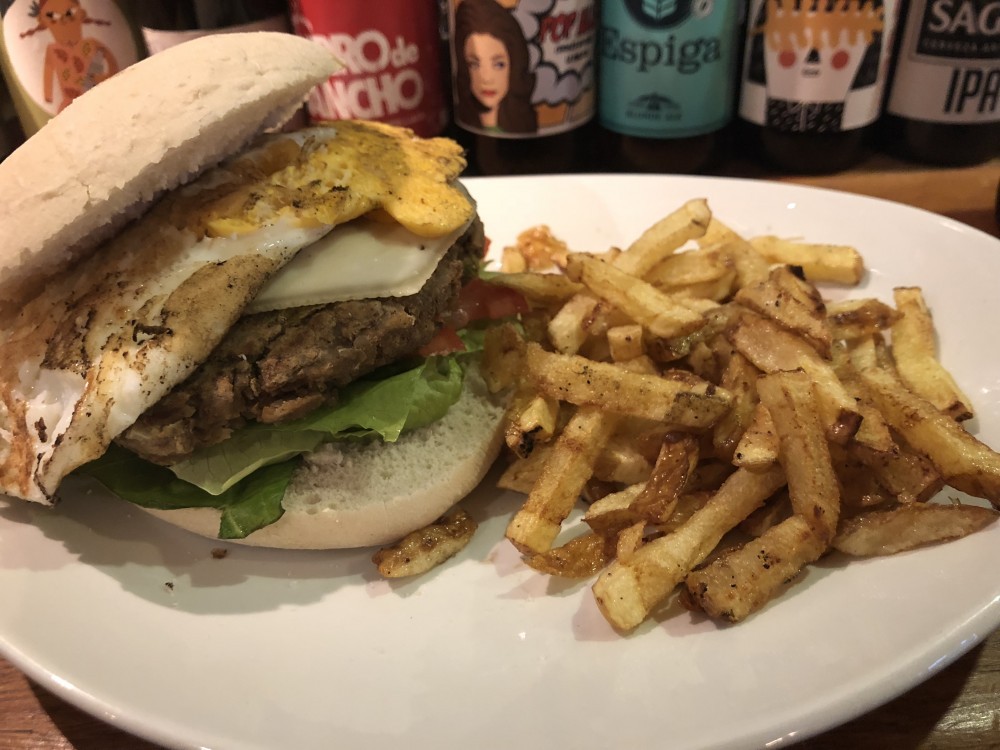 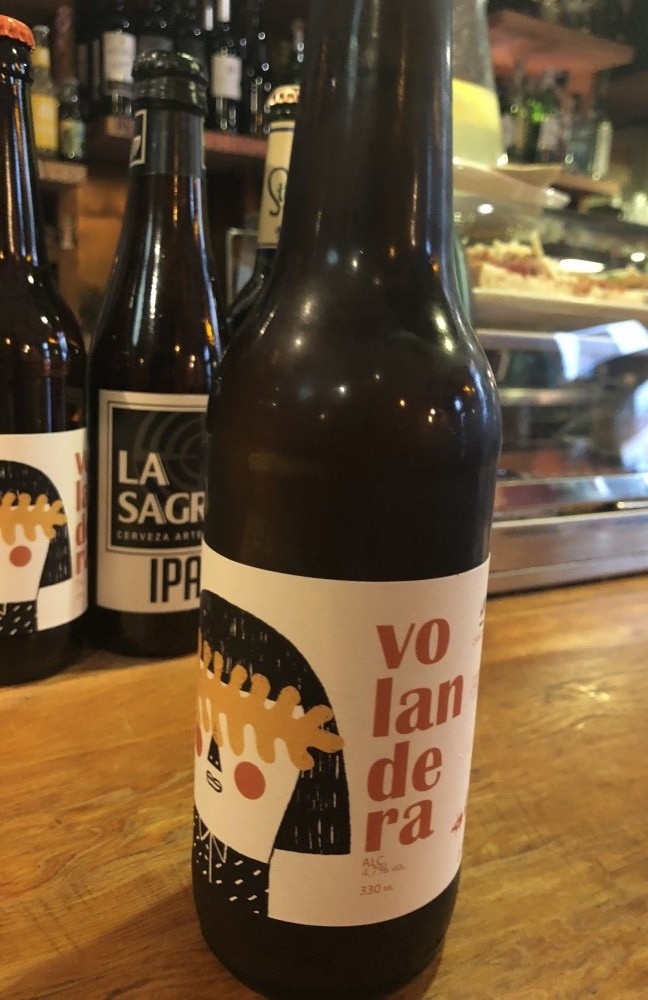 Overall, though, it was a decent place, but I wouldn’t go out of my way to go back. I would probably give a 7/10, in terms of food quality and service and recommend it to anyone who is in the area and ravenous.

This is the conclusion… for now. I only covered a couple of the places I went to in Madrid itself! I will see you all in a few days when I post my next list of recommendations!