Hi Vegetarian Carnivores! I know I have been away for quite a while. I have been working on quite a few interesting things behind the scenes, including a podcast where I will be talking all things plant based! I have also been doing quite a bit of traveling and exploring the vegan scene in exotic destinations. So today I will be talking to you about my vegan travel adventures from my recent trip to Eastern Europe!

Can Eastern Europe be plant based?

When you think of Eastern Europe, “plant based” and “vegan” are not terms that you would necessarily associate with that region. In fact, all I ever heard about Eastern Europe growing up was how much meat they ate and how it would be almost impossible to live there as a vegan or vegetarian. So I was a little nervous spending two weeks in a place that I was told would not have any options for me.

Interestingly enough, I was pleasantly surprised at the number of purely vegetarian or vegan restaurants in the cities I went. I was in Prague and Vienna for the majority of my visit and was able to check out a lot of different vegan and vegetarian eats there. So let’s get started!

I started my trip in Prague, home to a chain of pure vegetarian restaurants called Dhaba Beas. I think it was originally an Indian chain, but morphed into a pan Asian style vegetarian “serve yourself and weigh to pay” type casual fast food place. My parents and I were floored! They always crave Indian food, and I am always trying to eat other kinds of food so this place served quality food that was able to cater to all of our taste buds at the same time. There are about 12 or so of these casual restaurants in Prague and we ate there a few times during our stay. I highly recommend this place for any group of people that seems to always want different food for a reasonable price. I got a plate full of food with leftovers for the equivalent of 13 dollars.

Next, we went to a restaurant called Vegan’s Prague, located relatively close to Prague Castle. We went there for lunch to find that we had to climb 5 flights of winding stairs just to reach the restaurant! At least now we know how Europeans always seems to be fit 😉 Anyway, we ordered a delicious loaded hummus and vegan yogurt plate as a starter, and a loaded veggie burger and zucchini low carb lasagna. They were delicious! 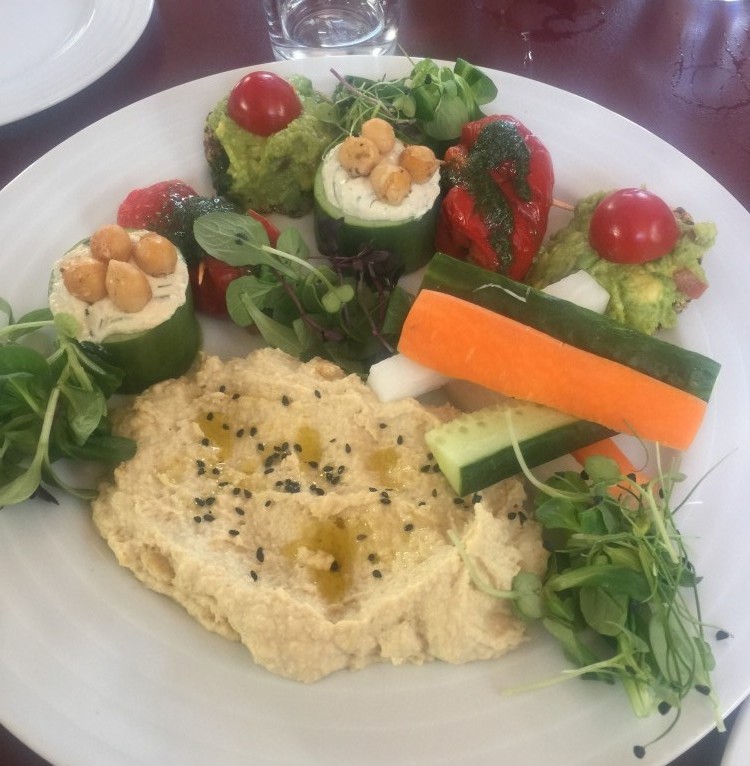 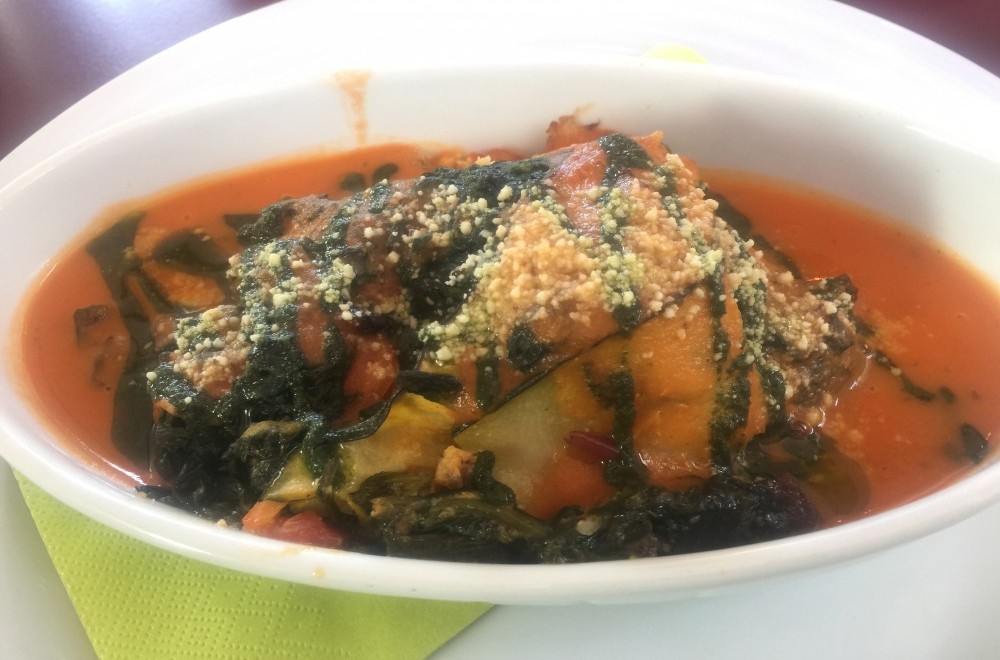 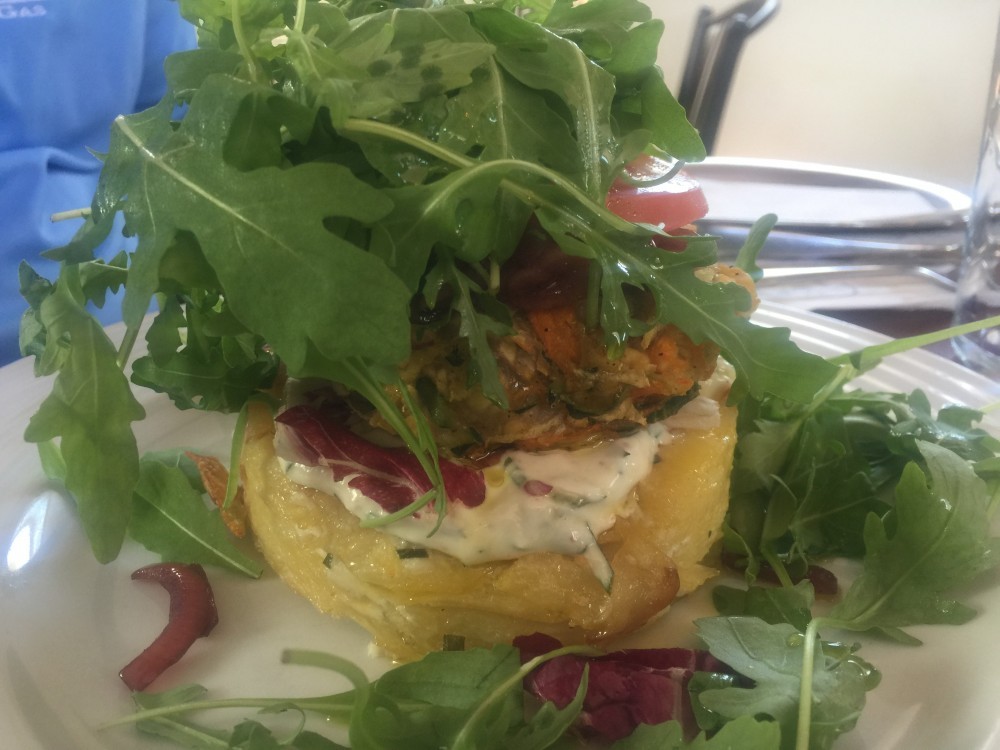 One thing I have to say is that typical Eastern European food is not very appetizing to me and my family. We had ordered a dumpling stew on recommendation from our server that it was more traditional Eastern European food, only to find a couple of lentil dumplings in a sweet tomato paste, served with bland white bread. I cannot fault them for making the food the way they did, but I can say that our taste buds did not savor the dish. It is pictured here. 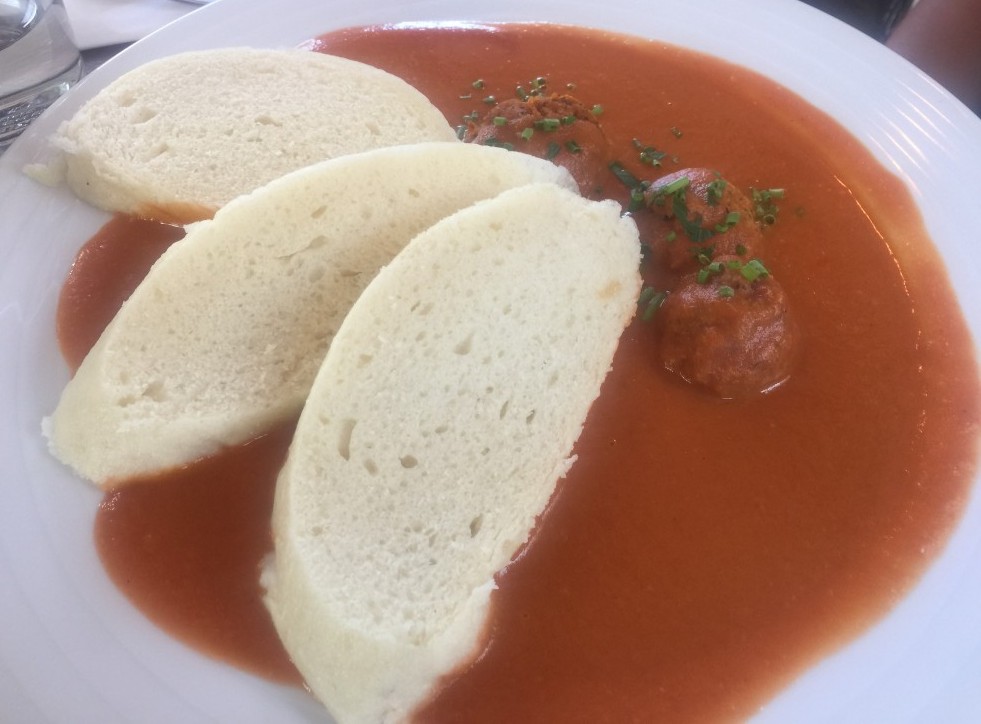 All in all, though, Vegan’s Prague was a great find (if you don’t mind climbing a lot of stairs).

On to Vienna! Easily the best part of my trip for food, sights, culture, and art, Vienna absolutely stole my heart! From McDonald’s (Yes, McDonald’s!), to vegan ice cream, Vienna was so vegan friendly it was so wonderful.

Let’s start with Veggiezz, a plant based restaurant with a menu so carefully vegan that even their wine was certified vegan. I have to admit that I am not always careful that the wine I drink is vegan, but it was really nice to see an establishment making such conscious choices for the planet, including bamboo straws instead of single use plastic.

We went to Veggiezz twice because the menu was so amazing we couldn’t try everything we wanted in just one visit. Through our two trips, we ordered vegan Viennese bratwurst (traditional sausage), soups, sandwiches, veggie burgers, a quinoa stir-fry, pasta with vegan gyros, the best vegan pepper steak I have ever eaten, and the most convincing vegan soy yogurt that would fool even the biggest yogurt fanatic (aka me). 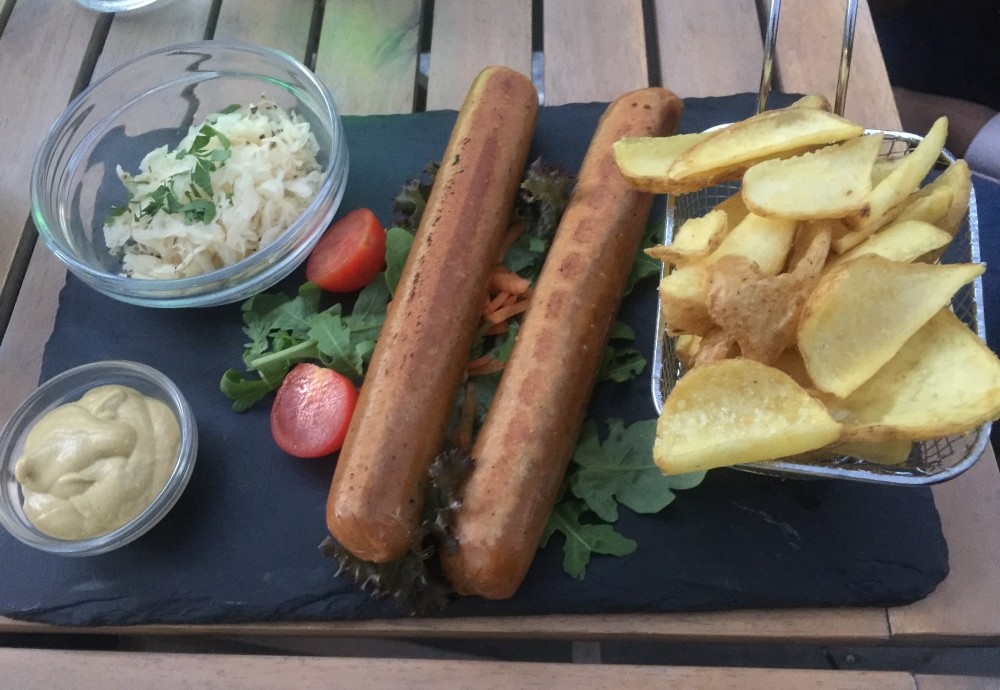 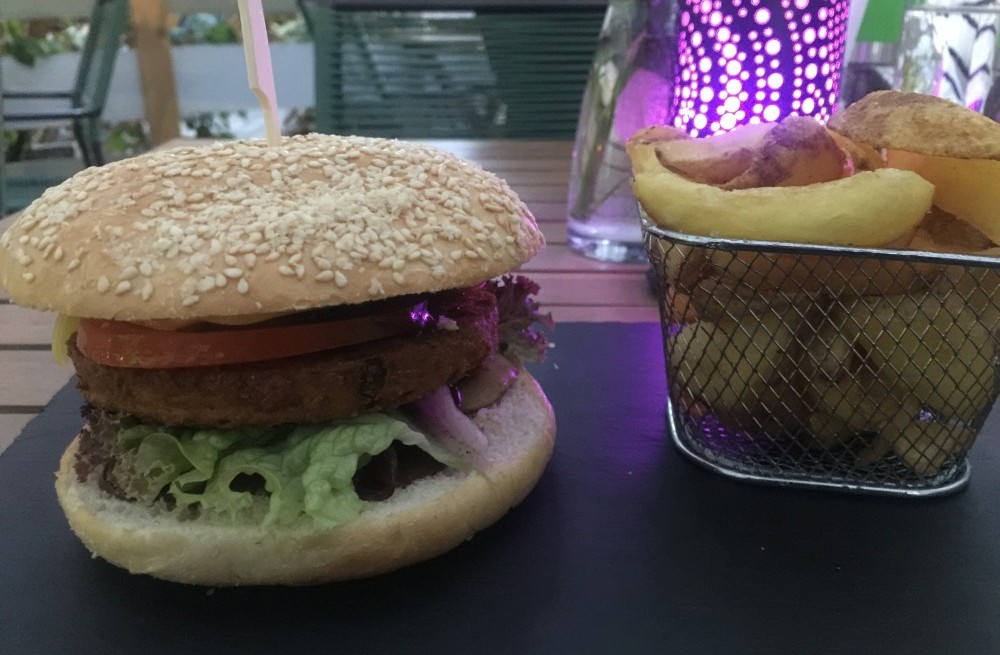 Honestly the best part of this place was the variety – on my plate we had a seitan steak for protein, avocado for healthy fat, and sweet potato fries for fiber, beta carotene, and antioxidants. Our meals were really well-rounded and it never felt like anything was missing. 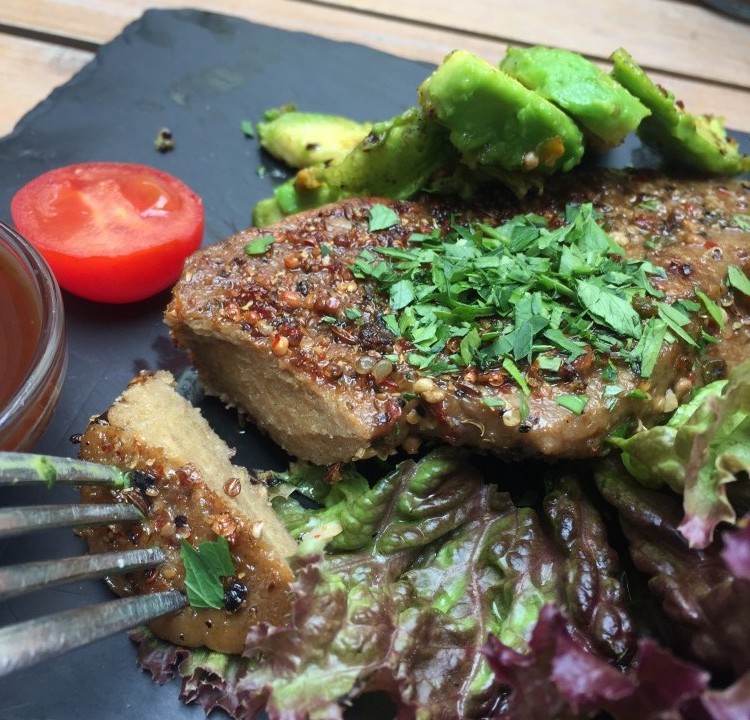 And of course the most convincing vegan soy yogurt in the world! 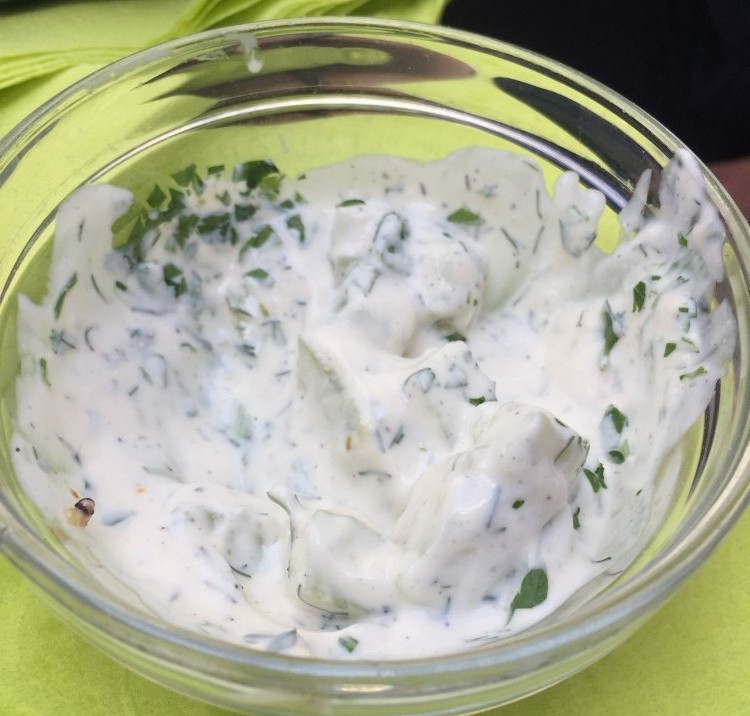 This was the non exhaustive list of the vegan restaurants that made a huge impression on me! More to come soon! And like I said earlier, I have some surprises underway for all of you, including some really exciting collaborations and a feature on one of my favorite podcasts!

It is just good to be back!