Skip to Content
Home Around the World Reviews Vegan Restaurants in Orange County – For the Meat Lovers!

Hey guys! I got so much positive feedback from my article, Vegetarian Restaurants in Seattle, which I wrote during my Memorial Day trip this year, that I decided to write another one. As I wrap up my final days in Orange County, soaking up the sunshine and making my last few Disneyland trips, I thought it would be fitting to write about some of my go-to vegan restaurants in Orange County here in Irvine and nearby.

As I’m sitting here at my apartment complex’s pool area, I can’t help but slightly panic that my graduation is in 6 DAYS. What even happened to the last four years?! I have so much to look forward to after I graduate. First, a much-needed vacation to Spain, where I get to immerse myself in the language, food, and culture for a couple of weeks. I am so looking forward to the language immersion to make me proud of all my hard work towards my Spanish minor.

This post will only talk about restaurants in Orange County and not SoCal as a whole, reason being that it is a literal pain in the behind to make the trip up to LA and not even necessary given the options here. I am going to clarify again here: not all restaurants I cover below are necessarily fully vegan/vegetarian. I have simply labeled them as such because of their dedication to be all-inclusive with their menu to cater to different dietary preferences. All these places have an extensive vegan/vegetarian menu, that made me so proud of how far we have come in expanding our notions of what good food is. 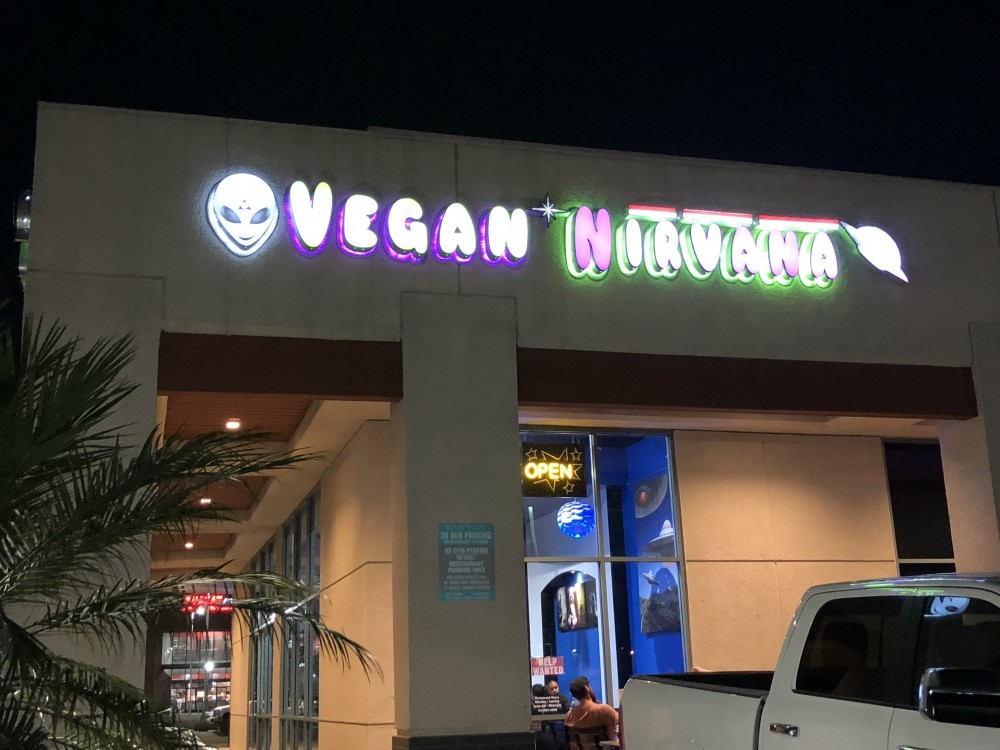 I went to this alien themed, super hipster, vegan restaurant last week, by request of one of my best friends here. He had been pushing me to go here for a few weeks and I had been pushing it off, simply because it was in Huntington Beach, aka not walking distance from my apartment, as a ton of eateries are here. I am so glad I finally went because I now understand what he was so hyped about. It should have come as no surprise to me because he is not a vegetarian and he himself said that the vegan shrimp could have actually fooled him. I was wary, because I once had vegan shrimp at a restaurant in NorCal many years ago, and it was super disappointing and put me off from the idea of vegan shrimp again.

My friend and I made the 15-minute trip to Huntington Beach for this vegan food. I was surprised at the quirky alien theme; I thought it was funny and different enough to draw attention to it. It had a really “self-love nirvana and inner peace” vibe, with aesthetic ceiling lights and wall art showcasing meditation and yogis. As someone who does not necessarily consider herself a hipster, I was totally able to see how hipster this place was.

We got the Ocean of Love, which was the fried “shrimp” tossed with jalapeños, basil and bell peppers. This was, hands down, the best decision I made all week. The texture was difficult to describe, but according to my shrimp loving friend, “pretty damn authentic looking and tasting,” which was a great thing to hear because I loved it so much! I actually even asked the server what it was made of because I am a food blogger, and apparently it is made of something called konjac root. When I am feeling adventurous and back home where I have all the space I need to experiment, I will be perfecting my own recipe to vegan shrimp. Yes, that is how floored I was by it. If any of my readers live in the OC, I highly recommend you all go and try this place’s shrimp. 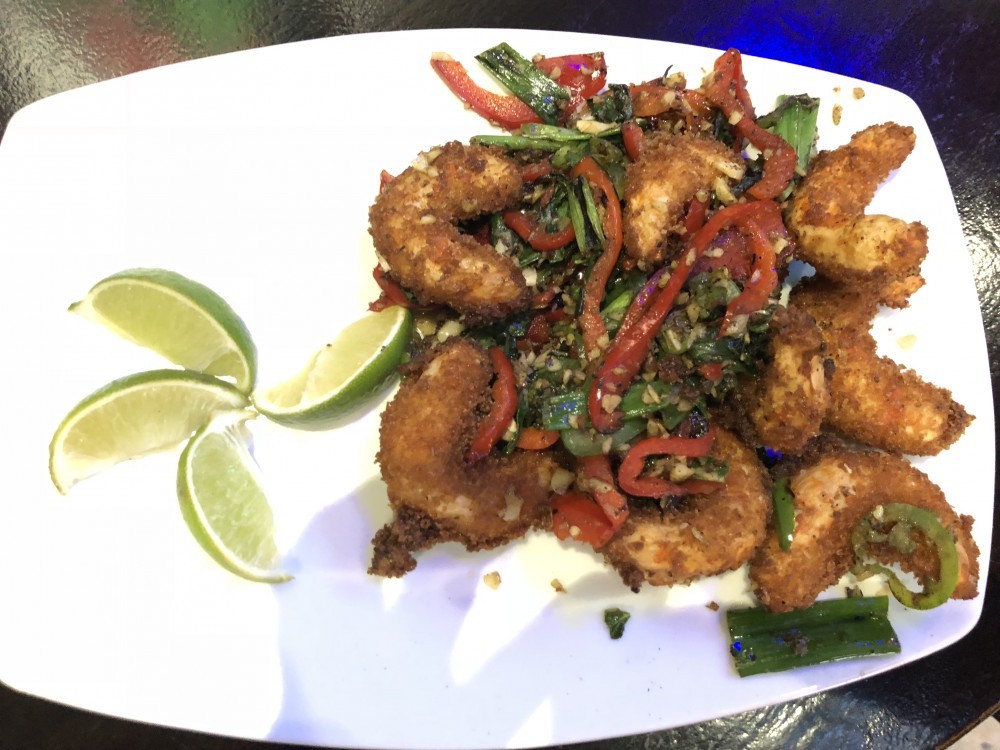 We also ordered Kingdom of God, which was a meatless chicken dish tossed with tofu and assorted vegetables in a KBBQ sauce, with a side of multigrain wild rice. The soy chicken was really good, though apparently not exactly the texture of real chicken, but it was still delicious and I would eat it again. BTW, I didn’t realize the picture kind of shook when I took it… my bad lol 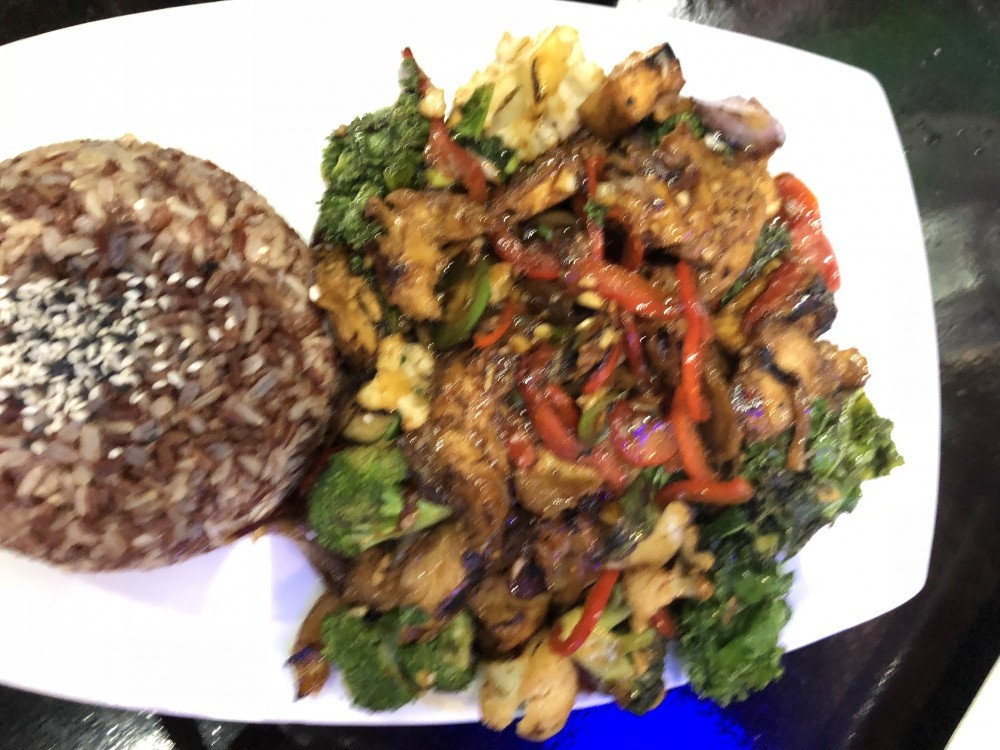 And lastly, we got a side of the Selfless Savior sweet potato fries with vegan thousand island dressing. Any In n Out lovers out there? (RAISES HAND) Their vegan version of the classic sauce tasted exactly like the original. Neither my friend nor I could even tell the difference. And that is impressive! 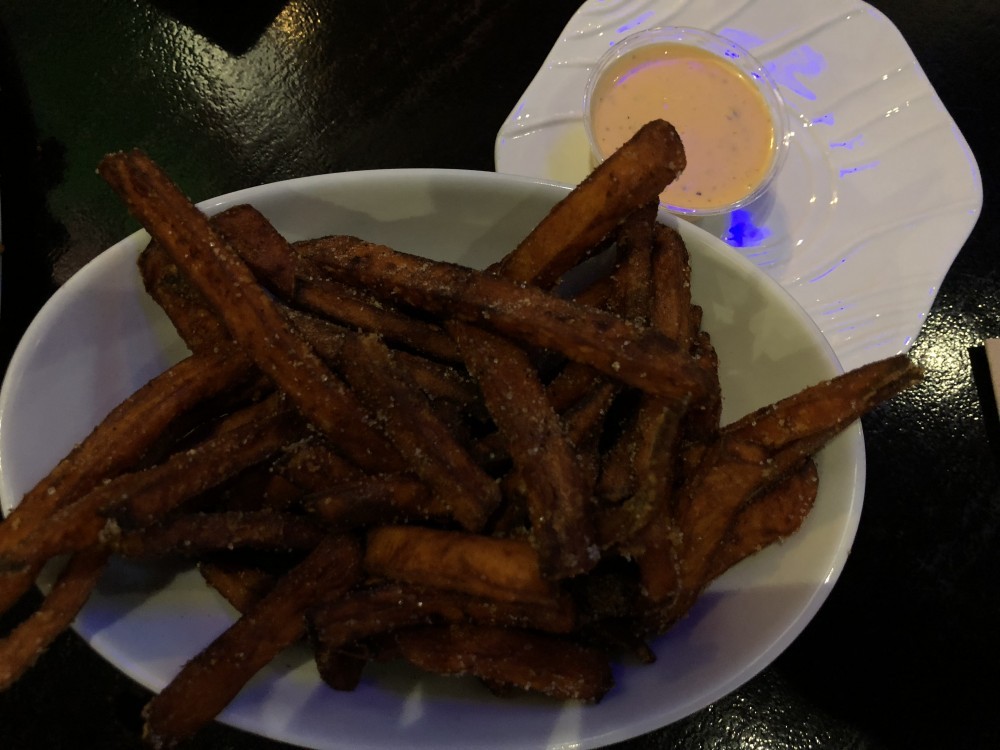 Ok, I am kind of cheating here, because this is not a standalone restaurant and technically it is gone from Irvine. But this vegan all American eatery has all the classics, from burgers to fried chicken to fish tacos, with the best and deceiving vegan cashew cheese you have ever tasted in your life.

My personal favorites from this place were the crispy chicken plate, which (successfully) attempted to mimic a fried chicken breast with gravy and kale on the side. I got it every time until they discontinued it 🙁 and replaced it with a southern fried chicken tenders dish, which became my new favorite there. I also love their buffalo bomber, which is a buffalo chicken style sandwich and just super delicious. But the best thing there probably has to be their burgers, which features the Beyond Burger plant protein brand. If I didn’t know it were vegan while eating it, I would have freaked out; that is how convincing it looked.

Again, I cheat. I first had a sandwich from this chain near my home in NorCal and was so floored that I actually hunted down a branch here in Orange County. There is one in Newport Beach and since I had it in NorCal last summer, I have been to the one in Newport Beach so many times. I am including it on this list because it has an entire vegetarian/vegan menu! The left of the menu is not vegetarian and the right side is an extensive list of vegetarian/vegan options that encompasses everything from imitation turkey to chicken to bacon.

If you are in California and looking for a place that gives the option of tasting a lot of meaty sandwiches and subs, I really suggest you make a trip to Ike’s. They have a bunch of locations spread out around California.

It has been such an awesome four years here. But as The Veggie Grill closed due to the end of their lease, it’s a gentle push for me to pursue the next great chapter of my life. Next stop: Spain! (and more restaurant recommendations, obviously ;))