Hi everyone! I know it has been a while since my last post on my food adventures in Spain and I’m sorry for being away for so long! But now that I am back, rest assured that you’re in for a real treat with this post. My last couple of posts focused solely on Madrid and the culinary delights I explored there. And that made sense, since the majority of my Spain trip took place in Madrid. However, I was lucky enough to explore Sevilla and Granada, two beautiful cities in Andalusia, the southern area of Spain. Since I am always on the lookout for quality vegetarian/vegan friendly food, I was excited to see what this region had to offer. The restaurants in Andalusia were an absolute paradise! I knew that Madrid was vegetarian and vegan friendly, but from a country whose prize food is Iberian ham, I was still skeptical if cities besides the most popular ones had options. Newsflash: THEY DO.

It is no surprise to any vegetarian or vegan that our food choices are still a mystery, for whatever reason, to many people. And I suppose that as a Californian I have always been privileged enough to always have some great options out there for me. So when people started telling me that they simply are unable to be a vegetarian/vegan in their region or culture I first called BS. However, once I started paying closer attention to food opportunities in my travels it became apparent to me that certain places facilitated the meatless lifestyle a lot more, giving more opportunities for the transition or the sustaining of a meatless lifestyle. I have given this anecdote before and I’ll say it again: In Iceland I ate tomato sandwiches every single day for a week because their diet consists of lamb and fish. The concept of vegetarianism/veganism is extremely new to them, and only a couple months ago did one of their grocery stores begin carrying vegan products.

What I am trying to say is that some places don’t have the concept of a meatless diet. And in these places, after I have described to the server that I don’t eat meat, they ask me if fish or chicken is OK. They just don’t have the concept defined. This is what I loved about Spain. No one bats an eyelash when you say you don’t eat meat and I remember one encounter with a server in a restaurant that served meat. I asked him to change his gloves after handling meat and he did so immediately and asked if I was vegan. I WAS SO IMPRESSED. The very fact that he knew to ask me as if it were a totally common thing was so damn refreshing.

This restaurant was a super casual and hole in the wall type vegan eateries. It is run by a kind man who loves rock music. Their mission is unique and that was something I loved about it: to combine the love of rock music and the love and compassion for animals. Their place mats have facts about animals and immigrants that encourage compassion and understanding, as opposed to mob mentality hatred that is unfortunately present in this world. They have a menu, for which they cook the recipes in bulk at the beginning of the day and then it is first come first served. I didn’t go too late (maybe 3 pm) but about half the menu was already blacked out, so that was a real bummer. That being said, it is literally the only complaint I have of the place. The food and hospitality were incredible. 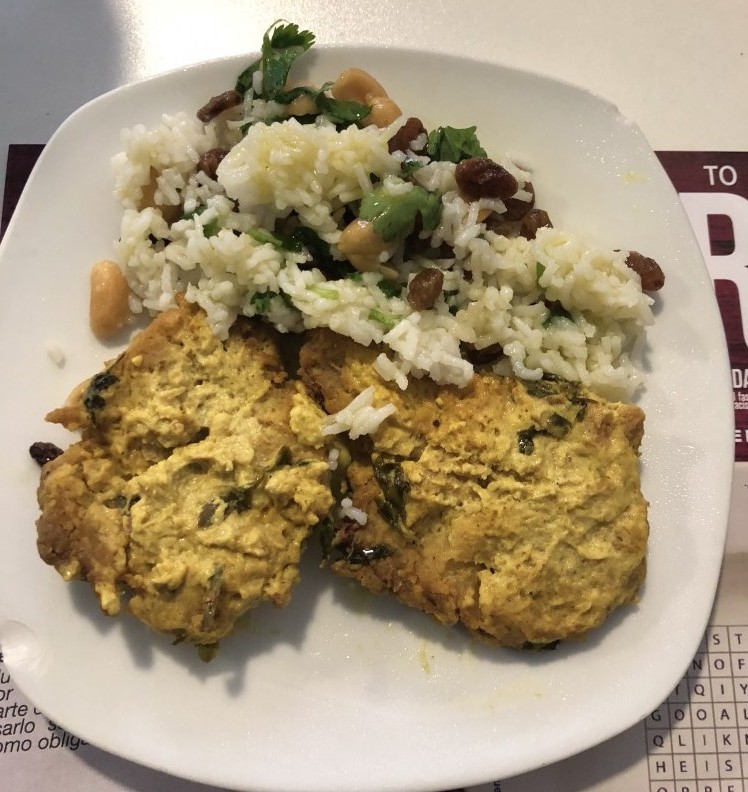 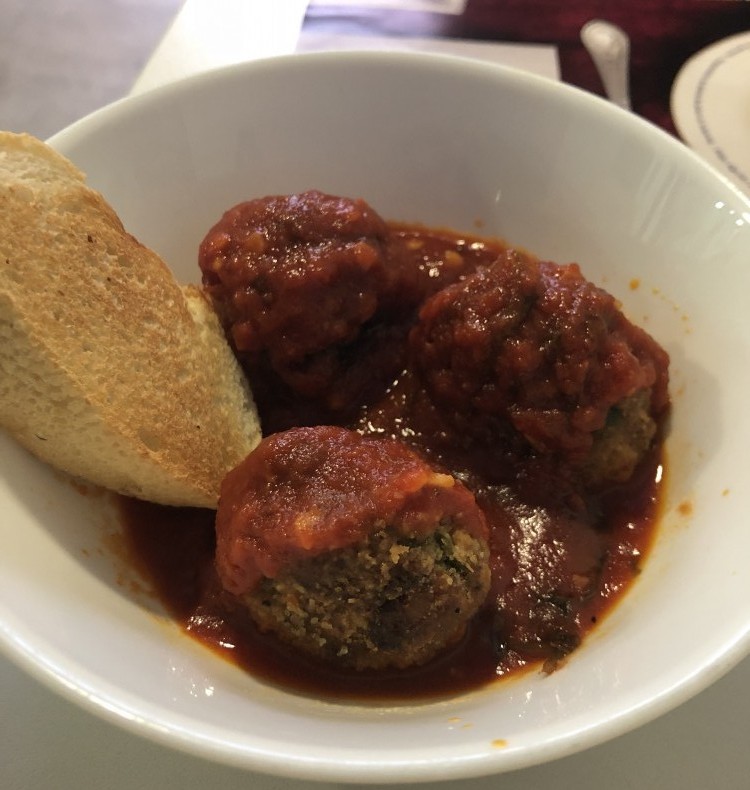 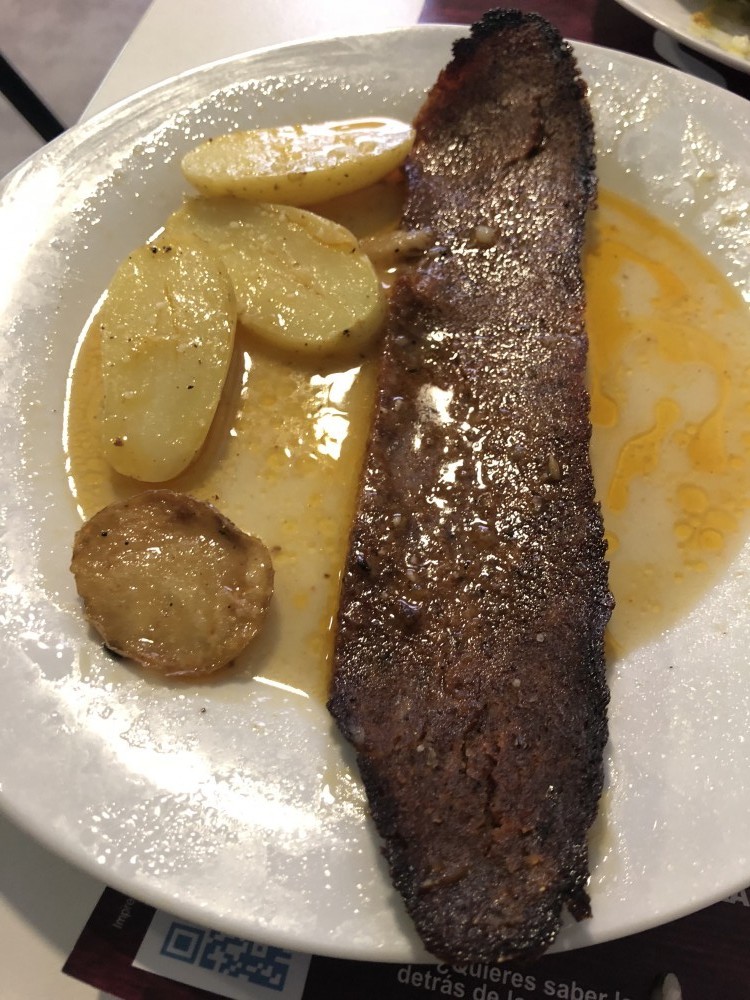 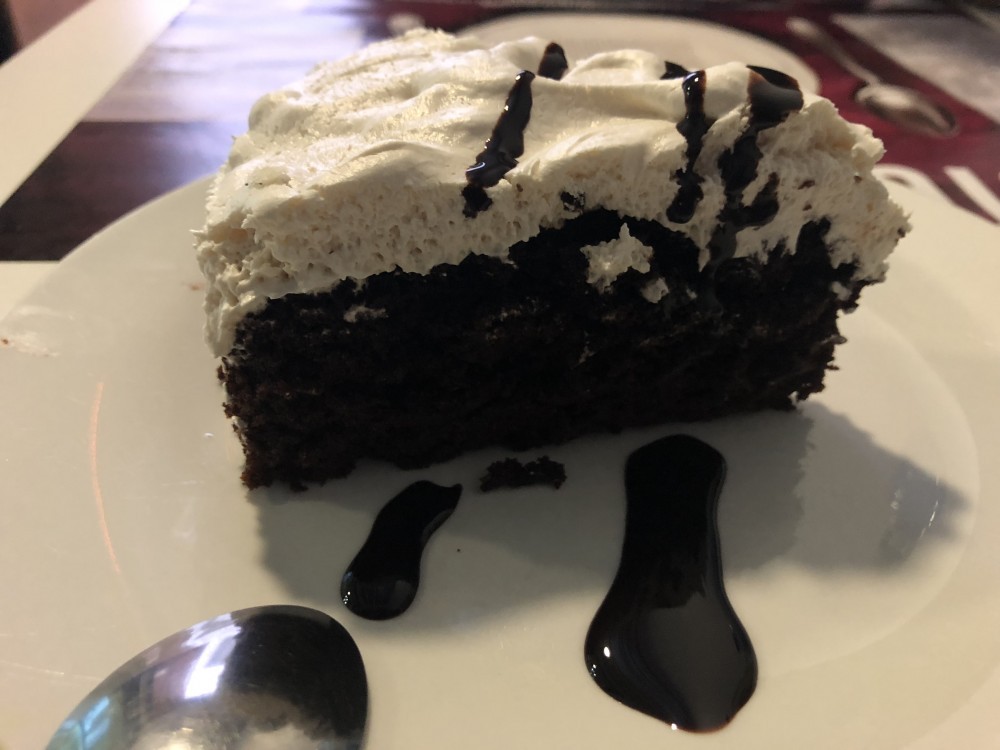 The no pollo a la mostaza was the highlight for me – I had no idea how they got the chicken texture so authentic looking. If it had not been explicitly stated that everything was vegan, I would have freaked out. Seriously. It was impressive! The meatballs and steak were also very well-made. I was all praises! Second highlight: the delicious black Forrest cake. Coming from someone who is very passionate about cream and whipped topping, this was some insane sorcery because I have rarely tasted non vegan cake as delicious as this. I was astounded at how moist the cake was and how soft and creamy the frosting was. It is not uncommon in vegan food for the whole concoction to fall apart, but this cake held its own and could have 100% passed off as non vegan.

I would totally go back to this delicious and friendly eatery! 10/10!

Another casual deli style eatery, Cocome serves up wraps, sandwiches, and other quick dining food. It is not fully vegan or vegetarian but made this list because I want to make the point that knowledge of vegetarian/vegan food is not restricted to those who are vegetarian/vegan, but rather the public, and that was the breath of fresh air I found in Spain. I had asked the server to change his gloves after I saw him handling meat, and he did so and asked me if I was vegan, in such a matter of fact kind of voice that I asked him to repeat the question. It is not a foreign idea to them, and he made some delicious recommendations on what vegetarian food he liked there. 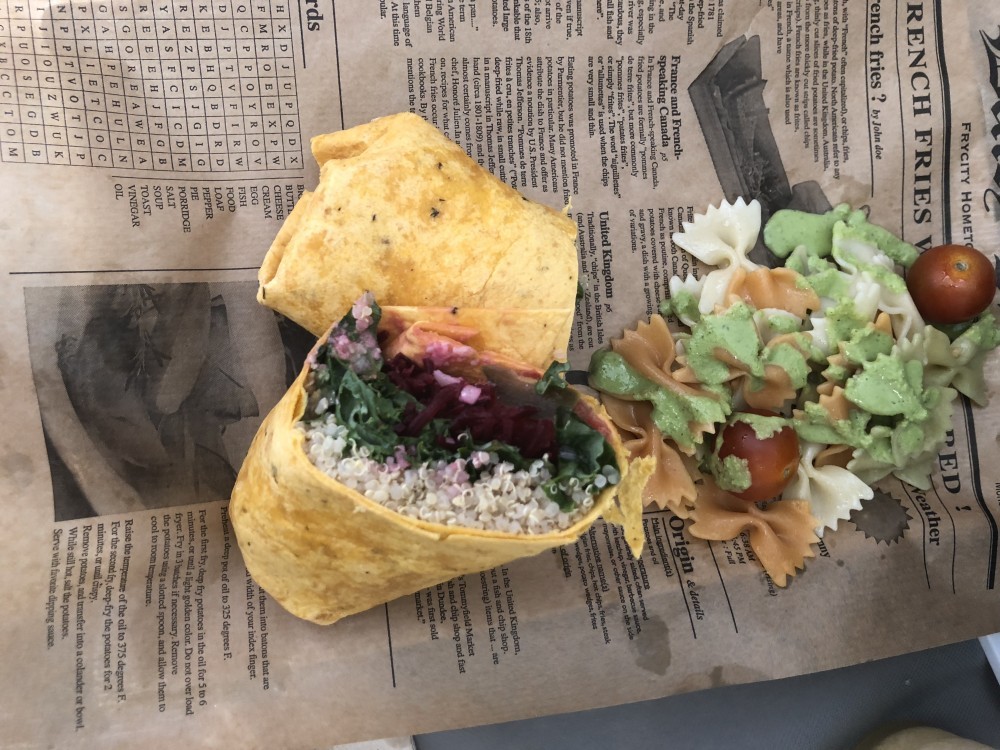 Let’s shift gears here and head on down to Granada. Hicuri is a vegan restaurant that seems to always have a line out the door. I didn’t even go at peak lunchtime and still there was a wait, but I was determined to eat there. And it was so worth it! I got their mushroom croquettes and “beef” lasagna, and ended it with a vegan tiramisu. 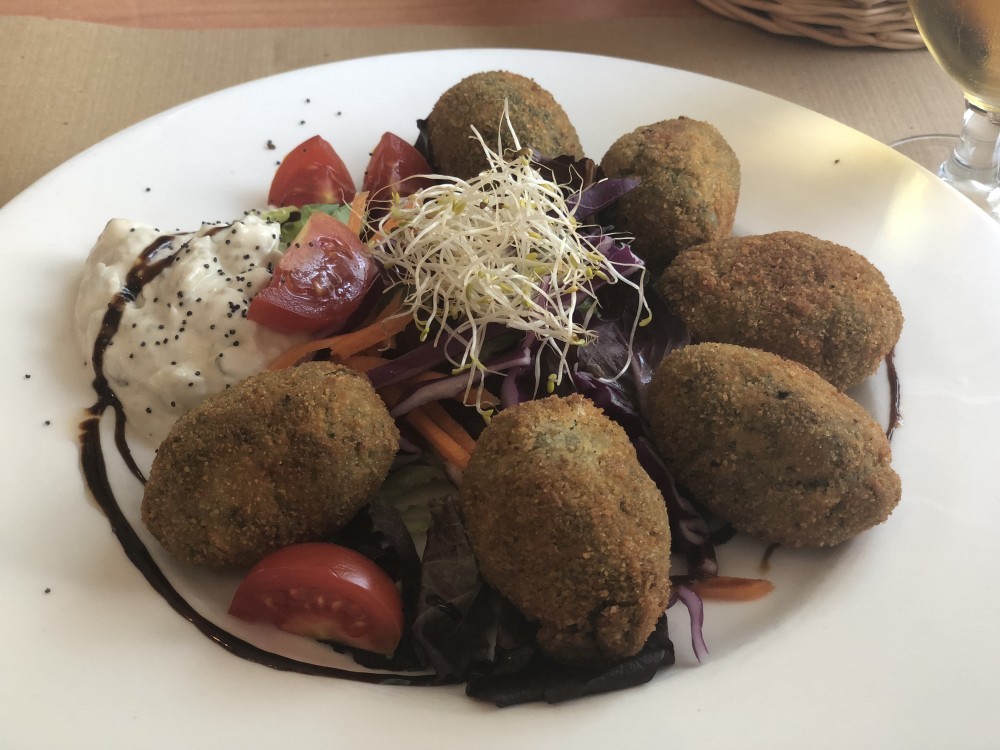 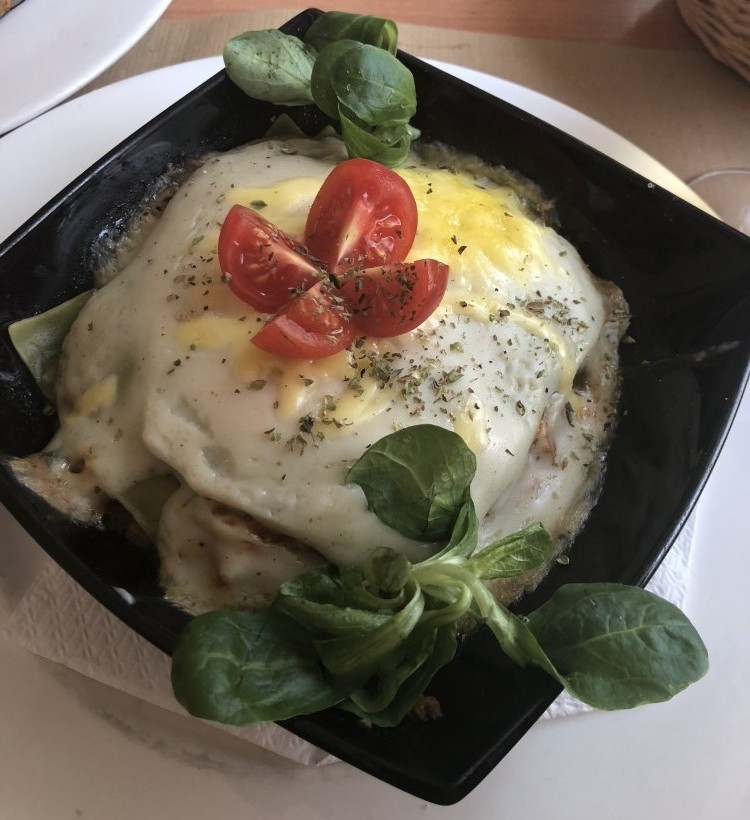 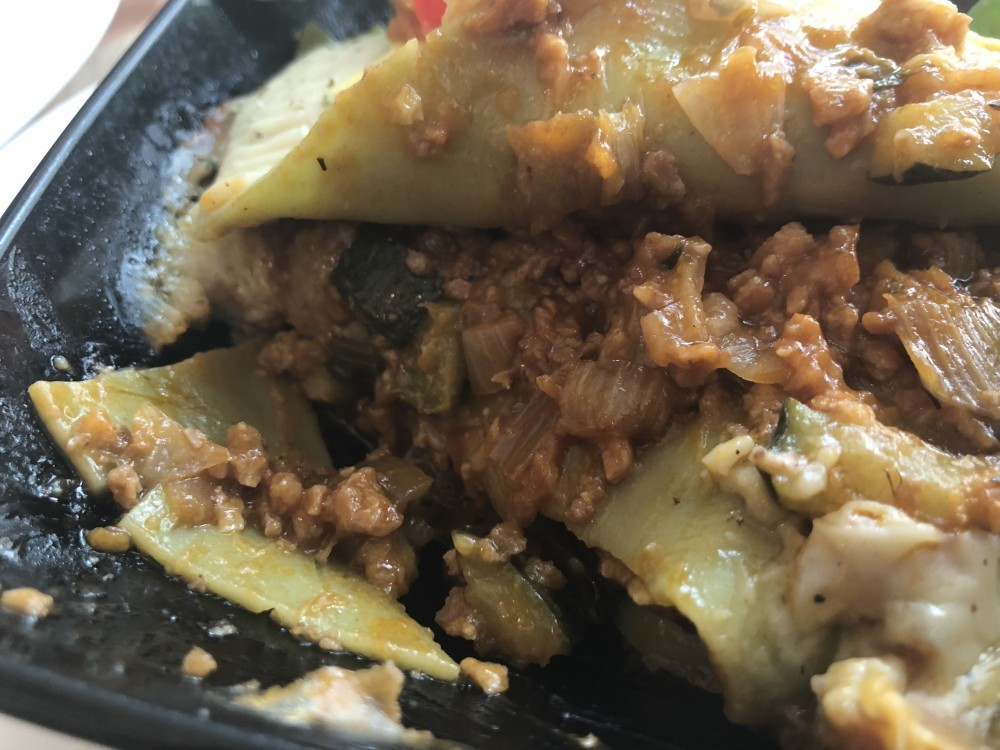 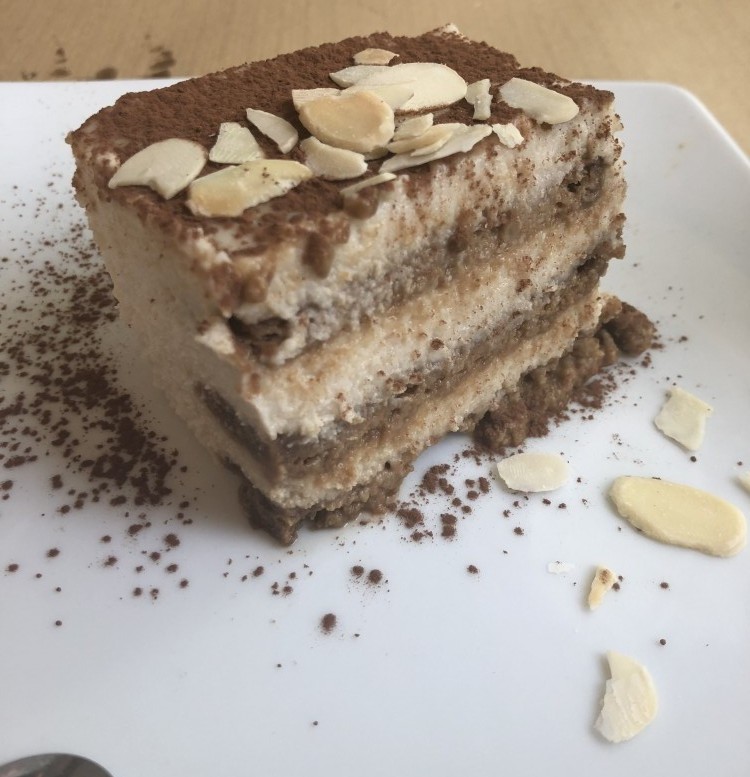 The croquettes were delicious and fried to perfection, but the lasagna was absolutely incredible. I have cooked with Trader Joe’s beefless ground beef to make “bolognese” and other traditionally beef dishes and as you saw, I included a picture of the inside of the lasagna to show the authenticity. The texture was incredible, but what really blew me away was the “cheese.” Having had quite a bit of not-so-good vegan cheese I was skeptical as to how good this cheese could even be… but again, some crazy sorcery and it looked and tasted as authentic as ever! The tiramisu for dessert was another incredible surprise. They had used almond cream in lieu of whipped cream filling, a substitution that yielded not only an unexpected flavor, but also more of a nutty rough texture than the traditional tiramisu. I loved it!

Stay tuned for my next post, which focuses solely on the delicious dessert places I went to! Can’t wait for your comments below 🙂