Hi Vegetarian Carnivores! I’m not going to lie to you- I used to think the idea of cornbread was super weird. I mean, as a native Californian, I didn’t grow up with it as part of my culture like people from the South did. And I thought that you just throw corn kernels into regular bread and called it a day. LOL yes that is how clueless I was. But the first time I had cornbread was at a Sweet Tomatoes (still salty they had to shut down 🙁 ) and I was floored! I wasn’t vegan at the time so I had it with their deliciously fluffy maple butter and I fell in love. And from then on, I would make sure to order cornbread at every opportunity. But when I went vegan, I realized I needed to channel my creativity to really get a wholesome and easy vegan cornbread recipe. Let’s go take a look.

Why you’ll love this cornbread

Cornbread is traditionally made with buttermilk and eggs, and those are both pretty important in the recipe. So in order to recreate the same effect, I knew I had to make substitutes that would act in the exact same way as those ingredients. Eggs is a generally easy substitute. There’s aquafaba, mashed bananas, applesauce, flax, and chia, just to name a few. And they all work in specific instances. For example, I’ve had great luck with chia eggs in cookies, but not flax eggs.

Eggs- In this recipe, I made a couple versions of it to figure out what really works best, and I came to the conclusion that flax eggs are the best. I made a version with chia eggs, but it really wasn’t as tasty as flax eggs. I think it is because chia has a mild, but present flavor, while flax is pretty flavorless and just gets the binding job done. Chia isn’t bad so if that’s all you have, go for it. But if you have flax, go for that instead.

Sweetener- I don’t like white granulated sugar. I have never liked it- I find it too sweet. And just as well, because they’re the most highly processed sweetener. I sweeten my sweets with dark or light brown sugar, as they give a delicious molasses-y chewy bite to cookies. I also love using maple syrup, especially in this recipe. I tried a version with just maple syrup and another with half maple syrup and half dark brown sugar. Trust me on this: use just maple syrup.

Cornmeal- There is a great variety in how fine or coarse cornmeal can come. All the versions I have had at restaurants have been incredibly soft. But here I used Bob’s Red Mill cornmeal, and it is very minimally processed and therefore pretty coarse. I really like the extra texture, but I recommend running it through a food processor to make it finer if you like. Or obviously just choose a brand that has fine cornmeal.

Flour to cornbread ratio- I recommend a 1:1 ratio here. I made a couple versions, one with 1:1 and one with a 3:1 in favor of cornmeal. The 1:1 ratio version is definitely better. 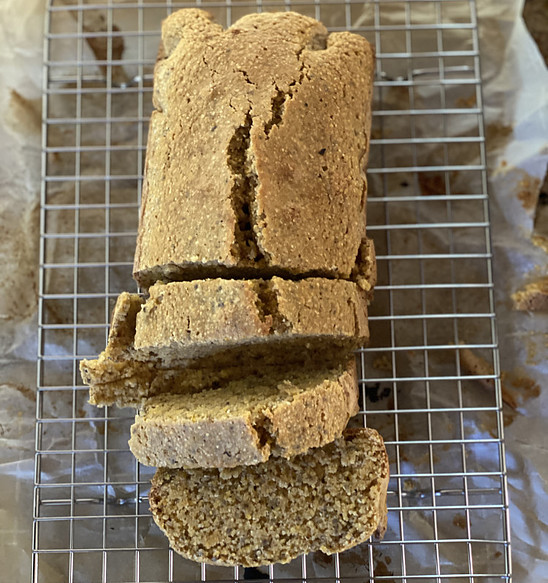 Cornmeal- Obviously. You can go as coarse or as fine as you like, and run it through a food processor to get it nice and smooth as well. I used Bob’s Red Mill brand and that was definitely way more coarse than anything I’d ever eaten at restaurants, but I have grown to like it!

Maple syrup- Perhaps one of the most versatile ingredients ever, and definitely one of my favorites, maple syrup really gives the dish a beautiful sweetness without being annoyingly too sweet, like white sugar. It also serves a double purpose and wets the dish enough to not need additional oil! Isn’t that amazing? The traditional cornbread uses white sugar and maple syrup as a dip after baking, but I like baking maple syrup right into the dish. It does give it something extra.

Flax eggs– Flax eggs are inconspicuous and are a great way to bind ingredients together. Please consider storing ground flaxseed for a versatile vegan baking ingredient. If you don’t have it, like I said above, you can use a chia egg. Additionally, you can use 3/4 cup apple sauce to sub in for an egg, since we are going for a slight sweetness. While I haven’t tried this dish with apple sauce myself, I’ve used it in other sweeter baked dishes, and I’d imagine it would hold up the same way here.

Plant milk + ACV- This serves as the buttermilk that helps further moisten the cornbread. The apple cider vinegar (ACV) helps to curdle the plant milk so that it has the consistency of buttermilk and behaves in that way when we work with it. 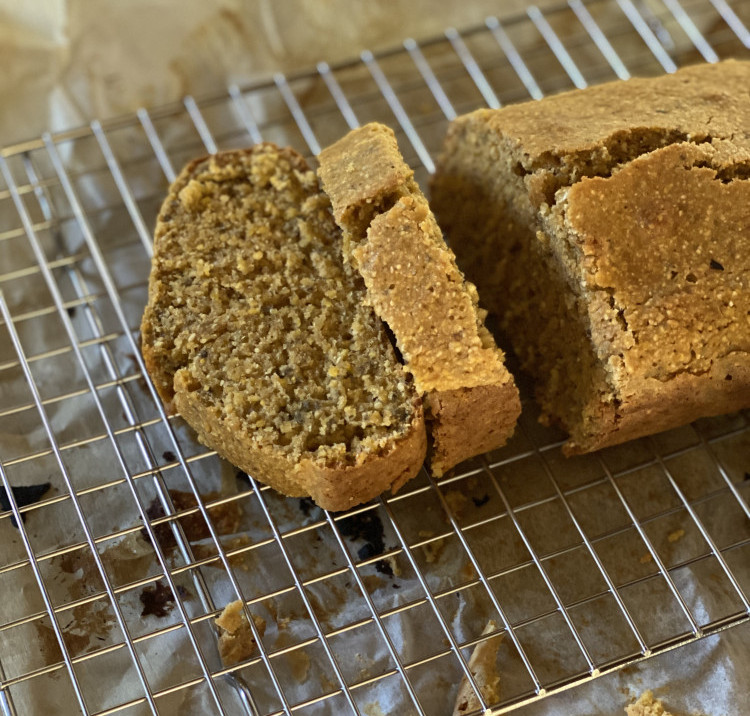 How to make vegan cornbread

Like most baking dishes on my site, it is simple and straightforward to assemble this delicious cornbread. It’s done all in one bowl so your clean up is minimal. And you don’t need even a whisk- a spatula or large spoon will be just fine for mixing. First, mix together your cornmeal, flour, and baking powder. Make sure the cornmeal is at the texture you want it at- food process it if you want. Then directly add your maple syrup, flax egg, and buttermilk and stir until all the lumps are gone, but don’t over mix it. Just let it come together. Pour it into your baking dish (I used a bread loaf pan) and bake it for 20-25 minutes. A toothpick or fork needs to come out completely clean- this is not like cake or brownies where the toothpick should be MOSTLY clean. Mine have been taking 23 or 24 minutes to get here, but your oven may run slightly warmer or cooler than mine, so keep an eye on it and use this baking time as a guideline. It should rise really noticeably by 15 minutes so if yours doesn’t, you may want to leave it in for longer. Let it cool for a few minutes on a cooling rack and you’re done. 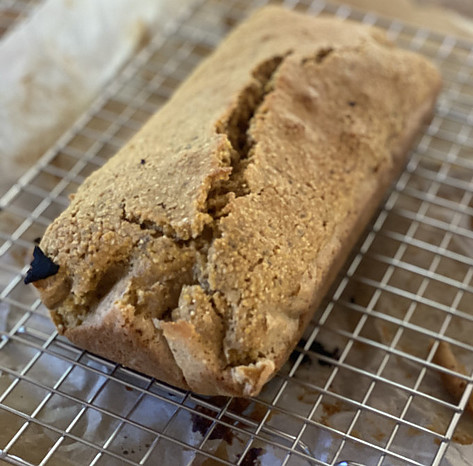